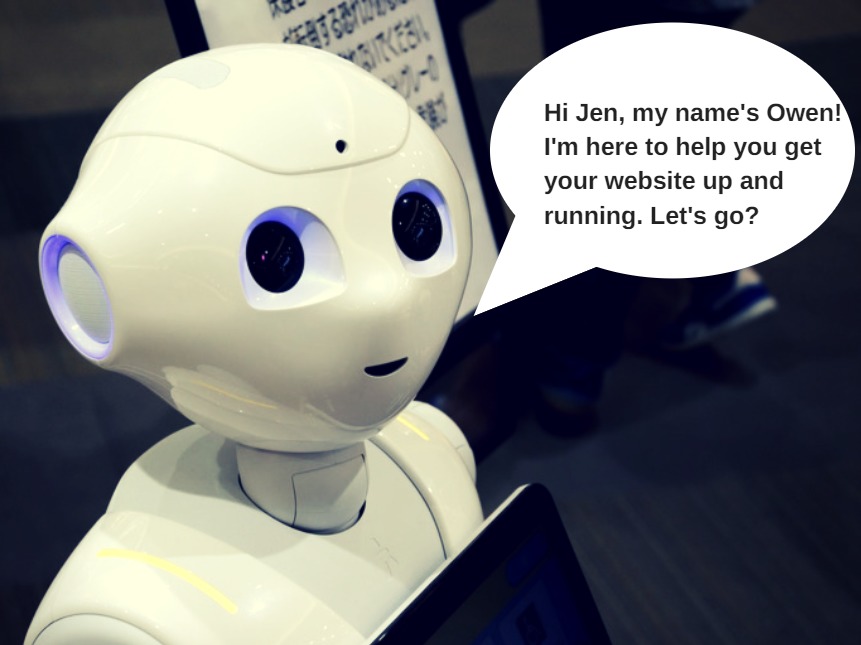 Modern conversational interfaces enable us to interact with machines in the user-friendliest way – using spoken or written words. Messaging platforms with billions of users to be reached will only multiply and become more powerful. The advancement of voice UI technology and machine learning that can simulate a natural human conversation will further transform business communication.

The use of voice interfaces is a trend of the future, but most conversational interfaces are still text-based. The creation of the right conversational UI and chatbot text takes some technical writing, film script or creative writing, transcreation, and interpreting, combined with a passion for good UX copy and insight into how people speak and write. The global goal is to model the user experience after a natural human conversation with its clear logic and inherent rules of cooperation. This means that anyone can contribute to chatbot building by applying the language skills that lie at the heart of the conversational interface design.

We would like to cover the importance of language design for chatbots and some relevant lessons we’ve learned while creating storylines for the flows, prompts, and messages to display. These practical tips will hopefully help you design and build a useful chatbot to delight the users.

1. Design the bot to meet the users’ needs

Chatbots assist users by providing expertise, increasing convenience, facilitating their interaction with a brand, etc. Make this problem-solving as comfortable as possible for them.

We start chatbot design with determining the bot’s perimeter, i.e. what it should and shouldn’t do. A rule of thumb to define the chatbot’s right perimeter is that it should know the meaning of every term it uses. Create gazettes of words that belong to an entity as a sort of business vocabulary the chatbot will face.

To manage the users’ expectations, give them an idea about the bot’s perimeter at the very beginning of the interaction. Design an initial message, animation or speech bubble with an appropriate text. It should not require long time reading and scrolling. Avoid stating the obvious or talking down to the users, and hook the users with a question at once.

Aim at developing conversational experiences that meet the needs and preferences of different users. Try to guess how they are most likely to react in specific situations. Remember that some may require more support while others may be deliberately trying to ‘break’ the bot through silly or tricky questions. Your choice of natural language processing (NLP) should also be tolerant of phrases, partial sentences, and spelling/grammatical errors and typos. The system must be able to process slang, jargon, abbreviations, emoji, etc., as well as to deal with user frustration and rude conversations. The bot should have multiple variations of ‘Sorry, I don’t understand’ and ‘Please help me out here!’ in store.

Avoid lazy and repetitive responses. In addition to the domain-specific terminology, the chatbot should use synonyms for those terms, slang equivalents, and abbreviations – all that the customers might use. Randomize the “acknowledgers” as well to make the experience feel more fluid and natural.

It’s impossible to design a customized series of questions and responses with the language targeting or adapted for each type of users. However, chatbots that ‘remember’ the user’s preferences, defaults, and past topics can display different content based on the collected data. Consider A/B/C testing with multiple responses and learning which ones work best. Machine learning will be immensely helpful as it learns what does and doesn’t work and eventually will help you design conversation flows automatically.

An ideal chatbot should be able to recognize when and where the conversation takes place and provide empathetic contextual responses. The mere use of language with its emotional load opens up the opportunity for a more relevant personalized bot experience. Leave aside your business goals for the time being and design the bot training with a single goal in mind: natural language understanding.

A good chatbot must use the implicit set of rules that regular human conversations follow. Building blocks of a fruitful conversation include:

Turn-taking in a conversation is based on signals that people pass back and forth. Give incentives to the user for responding and continuing the dialogue.

Threading helps us keep track of the conversation flow through a coherent context and the way each step links to the one before and after. Chatbots should pay close attention to conversational threads and use NLP to tease out the idea behind confusing statements and fragments.

People often leave some things unspoken but still can be understood, as well as ‘read between the lines’ in other people’s speech. A bot should understand what the user is asking based on contextual cues and use syntax to respond to what’s said. There should be a software-based mechanism to compensate for the illogical, non-mathematical nature of the human language. This is especially important with voice-activated and verbal conversational UIs.

User behavior in a conversation depends on their situational context and expectations of a dialogue based on previous experience. The worst case is apparent mistakes and misspelled words. Conversational UIs must be ready to support a variety of synonyms, styles, data formats, and other variations to ensure a frictionless experience.

Text shown on mobile devices must be quick to skim, read, and use on the go. It’s generally recommended to keep the bot’s messages the size of a tweet for the sake of convenience. Still, there are situations where it is best to respond with a long text, list, etc., so that the user can screenshot some important information.

The last point about the ‘right language’. Localization is one of the practical advantages of the conversational UI. You can set up the back-end database in such a way as to add in translations to other languages. Since it’s all copy-driven, the translation will be pretty simple, allowing to launch a localized version of your chatbot interface quickly and easily.

A certain ‘personality’ originally crafted for your chatbot will give you more control over the user experience with it. For example, during personal data collection, a ‘friendly’ bot can make the difference between meeting a new friend vs. being surveilled. Empathetic and natural-sounding bots can upsell according to users’ needs. A distinct bot personality also helps reduce the volume of language that will be used in the conversations.

When building a bot for Facebook Messenger, Slack or Telegram, their graphical UIs limit the visual component of your conversational interface design. Your only chance to make your bot unique is to design its conversations with the visitors. The good news is that the medium allows to invent whole characters seemingly living behind the messages. 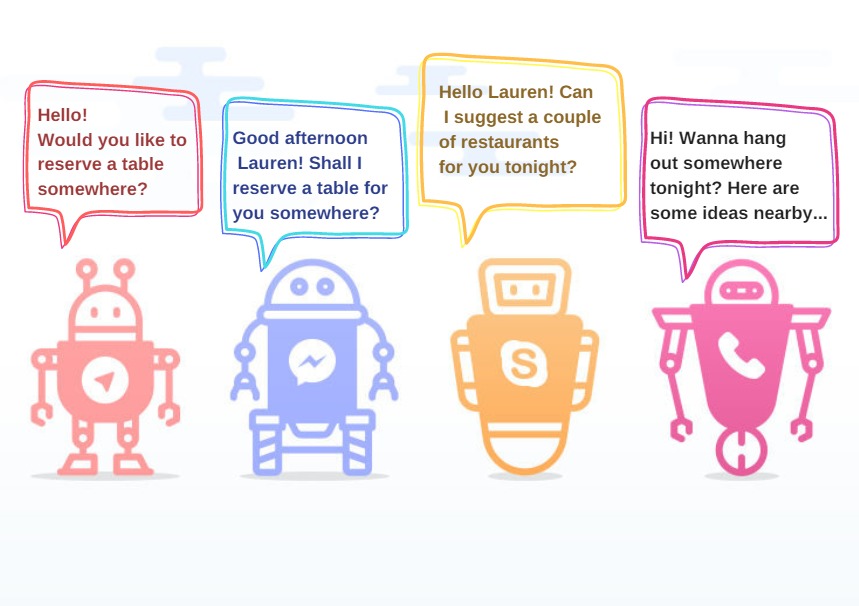 All this begins with knowing your users and the context, such as their age, expertise, etc. Visualize a clear persona of the bot ‘behind the curtain’ that can resonate with the users and develop a style and tone of voice that fits the persona. The chatbot prompts should align with the conversational style and tone. The vocabulary choices should project that persona as well.

A polite chatbot uses ‘we’ and ‘our’ while talking to potential clients and says ‘you’ or ‘your’ only when it’s absolutely necessary. It might compliment the user on a successful session or motivate them if it failed. It should not sound condescending or press the user by using UPPERCASE! prompts.

Your chatbot interface embodies the traits of your brand. Pay attention to those personality traits which determine the bot’s greetings, small talk, errors, and requests for user feedback. Would it use formal language or be more colloquial? Will it give curt responses or compose lengthier sentences?

Can a chatbot sound witty or use an occasional curse word? Why not? Unexpected responses, phrases or single words in your chatbot’s repertoire will keep the users engaged throughout long conversations. Humor can also enhance the user experience, and if a user explicitly asks the chatbot to tell a joke, it can’t help but comply. Just make sure to use humor wisely, in context, and respecting the cultural nuances. 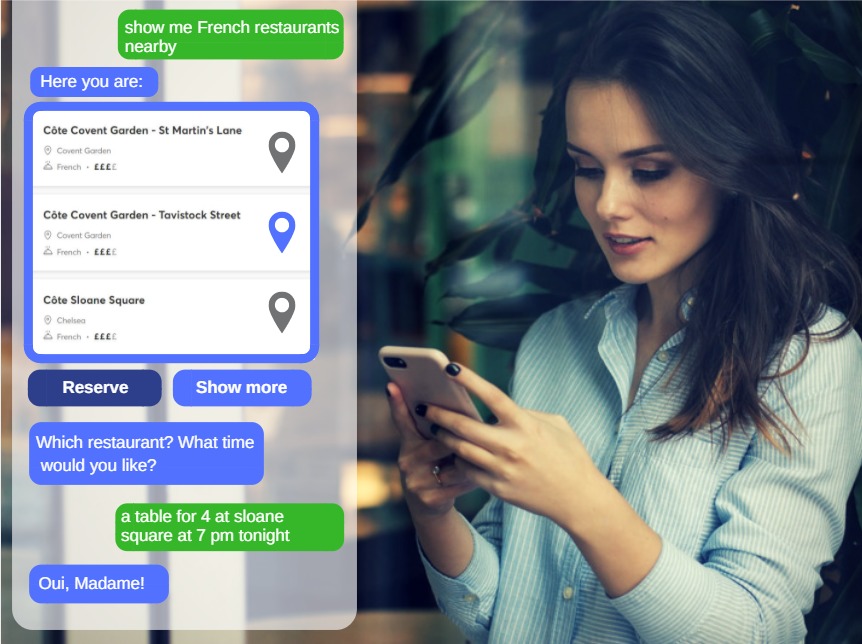 The more human-like your bot is, the more natural, smooth and seamless the interaction will be. Emotion-sensing enables bots powered by artificial intelligence to understand the user’s feelings behind a message and react correspondingly. Another strategy for more humanlike chatbots is to reflect the way people chat with each other on- and off-line. When the user speaks in slang, the bot’s use of the same slang makes it more relatable and eases confusion. Filler words can help conversations sound more natural too, especially if the bot has a voice.

3. Make the conversation simple and easy

The chatbot should have simple goals, which the user should be able to achieve without overthinking and clicking/typing too much. Try to simplify the users’ choices to let them get what they need quickly. The topics of the conversations must stick with the issues which the chatbot should resolve.

The system must provide simple expected dialogue direction to the users. Graphical UI elements help guide the conversation, but the language you use is your primary instrument. Enable the users to select from multiple options quickly. Include clarifying questions, ways to rephrase queries, and prompts for solving errors into your conversation flows.

Make the texts of the buttons or other widget labels supporting the chatbot prompts short and action-oriented. Use the imperative form of verbs, so it’s clear to the users what selecting that option will entail. Start the prompts with a capital letter and end with a punctuation mark, such as a period or question mark.

Remember that users will be primarily viewing your chatbot interface on mobile devices. Moreover, the message bubbles in most messengers stick to a side of the screen, which makes longer messages look like flabby blocks of cramped text. Try to make the bot’s messages short and concise. Taking turns with short utterances, like a lively conversation, keeps users engaged, prompts them to act immediately, and helps prevent misunderstandings resulting in back-and-forth dialogue.

Give preference to short words over long ones. Long, complex sentences are especially undesirable in a voice interaction. However, responses that are too short, such as a simple ‘Yes’ or ‘No,’ make the conversation sound mechanical. It’s important to find a balance and test different utterances that align with the bot personality.

Speech is our old, efficient and favorite interface. Modern conversational interfaces should not only help the users meet their needs, but also feel as easy as speaking with another human – with a few improvements. UX design insight and empathy for people makes the difference when creating a chatbot design in any language. Words are more important than ever.

The better onboarding you have developed, the more comfortable the users’ interaction with the chatbot interface will be. The following choices will directly impact their perception of your bot personality and the entire communication with consumers:

Make sure that your chatbot language is supportive of the overall user experience in content, style, and tone. A thoughtful content creation backed by user validation and testing will promote higher customer satisfaction, lead conversion (e.g., through landing pages), and thus return on investment.